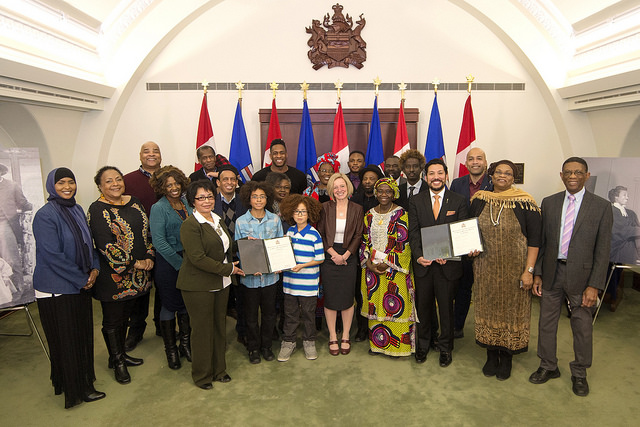 Premier Notley, Culture and Tourism Minister Ricardo Miranda and Edmonton-Centre MLA David Shepherd made the announcement at the Alberta legislature along with representatives from Alberta’s African and Caribbean communities. Photo Credit: Government of Alberta

On January 31st, 2017 Premier Rachel Notley proclaimed February as Black History Month in Alberta, recognizing the contributions people of African and Caribbean descent have made to the province. According to the Alberta Government Media Announcement, Alberta has the third highest black population in Canada at 74,435 (2011 census).
In honour of Black History Month in Alberta we thought we would showcase some mentoring resources supporting Black populations. The Ontario Mentoring Coalition’s Toolkit on Effective Mentoring for Youth Facing Barriers touches on Racialized Youth where the key lessons learned were:

And the Ontario Mentoring Coalition goes on to mention 10 Strategies for recruiting Black men to be mentors, which are:

There are also really great resources from the National Mentoring Resource Center in the United States, such as their Mentoring for Black Male Youth population review. This review examines research on mentoring for Black boys and touches on the documented effectiveness of mentoring, the extent to which mentor, youth, and program characteristics influence effectiveness, the processes that link mentoring to outcomes in Black male youth and the extent to which efforts to provide mentoring for Black male youth have reached.
For some supplementary material, you can also watch the MENTOR USA’s webinar on Leveraging Mentoring to Support Black Male Achievement.

Tweets about #BlackHistoryMonth in Canada